JoAnn was raised in Boulder and Kanab UT.  She and spent her youth outdoors on Deer Springs Ranch - herding cattle and riding horses. She would play innkeeper in their pioneer home in Boulder and pretend to serve travelers (played by her siblings and relatives).

As she grew up, got married, and built a family with her husband Jeff, she kept the dream alive to one day run a hostel. For 25 years, as they raised their family, she "practiced", doing such things as organizing and running youth camps in New Mexico and Southern California. Staying in hostels up and down the California coast with her daughter Jenni and their troop reinforced her dreams.

Jeff had come to know the area after meeting JoAnn. They vacationed in Southern Utah often and he collected history and insights on the local area and came to love the landscape.

In 2015, they were able to purchase the building and provide a place

“where strangers come from far and near and leave as friends.”

​How to get here:

From The North - Turn LEFT (East) on 300 North, which will be the first street you come to as you enter Kanab. Our building is on the left (North) side of the road ½ a block East of Highway 89 coming into town.

From The South - Drive through Kanab on Highway 89 and watch for the big church steeple on the right.  Turn Right (North) on 200 West just past Mountain America Credit Union. Drive up 200 West as far as you can go and you will run right into our building.

The Cowboy Bunkhouse Hostel provides a friendly community environment for our guests. Accommodations include community showers & bathrooms (some units include private bathroom & shower), fully equipped kitchens, laundry facilities, WiFi, a complementary continental breakfast, options to book a trail adventure with our resident Trail Boss and much much more.

We are family and pet friendly!

"Cowboy": 1) a person, typically one on horseback, who herds and tends cattle, especially in the western US and as represented in westerns and novels. 2) a rodeo performer. 3) one having qualities (such as recklessness, aggressiveness, or independence) popularly associated with cowboys.
"Bunkhouse": a rough, simple building providing sleeping quarters.

The American Cowboy was born from the knowledge of the Spanish vaqueros, a surplus of man-power as the Civil War ended and the surviving soldiers and freed slaves sought employment, and an overabundance of livestock. During the war Texas cattlemen would turn their livestock free rather than allow Union soldiers to steal them but when the war ended cattle in Texas were only selling for $2.00 a head whereas in Chicago the same cattle would go for $40.00 a head. The cattlemen decided to drive their cattle from Texas to the north along such cattle trails as the Shawnee, Chisholm, Western, and Goodnight-Loving to the railroads expanding from Chicago to the west like Union Pacific, Kansas Pacific, Atchison, Topeka, and Santa Fe.

As the west was being settled pioneers came upon Kanab - a Paiute word meaning ‘Place of the Willows’ and they recognized it as an oasis surrounded by the desert wilderness. The first anglo-americans to attempt colonization of the area was on June 7th, 1858 - what followed was years of unsuccessful efforts as the Natives rejected the white settlers who wanted the land for cattle raising. Brigham Young, the President of the Church of Jesus Christ of Latter-day Saints appointed Jacob Hamblin as President of the Santa Clara Indian Mission.  Hamblin organized expeditions to the Paiute, Moqui, and Navajo people with negotiations to share the land peacefully.  However through the 1860’s there were more raids and confrontations until 1870 when a third attempt to build a fort was made by seventeen settlers from Cottonwood, Utah.  President Young blessed the land in April of that year and set it apart for the gathering of Saints.

In 1924 Kanab’s scenery attracted silent film-maker Lynn Reynolds for the film Deadwood Coach starring Tom Mix and was backdropped by the Vermillion Cliffs. This classic was a catalyst for hundreds of westerns to be filmed around Kanab - giving a boost to the economy and influencing travelers to experience the rugged beauty of America’s southwest. Kanab is at home as the hub of the Golden Circle - called so for the close proximity to Zion National Park, Bryce Canyon National Park, the Grand Canyon National Park North Rim, and the Grand Staircase-Escalante National Monument.

JoAnn and Jeff Michelsen, Owners of The Cowboy Bunkhouse Hostel since 2015 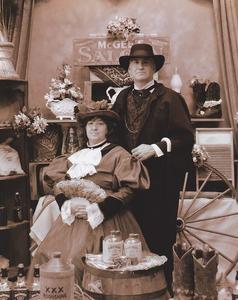